In order to understand the global risk of malaria infection, various health authorities and research institutes have conducted extensive studies to create various databases and overview maps of the distribution of Anopheles mosquitoes. 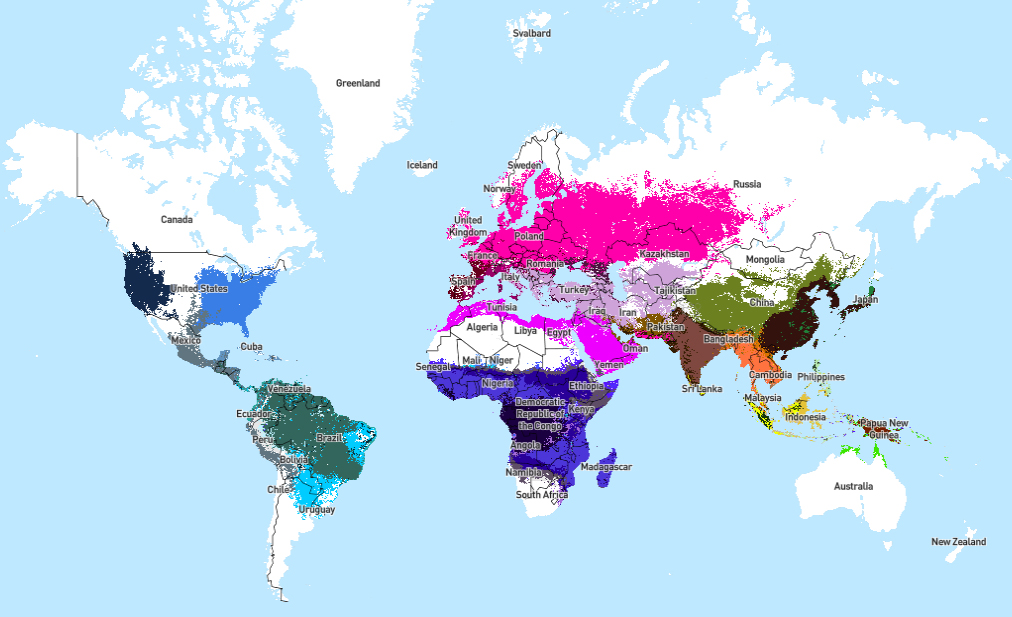 Source: “Malaria Atlas Project”, a cooperation between Oxford University and the WHO Presentation of 41 potential main vectors of the pathogen and their global distribution (8, 7)

It should be noted that this map is only about the spread of potential transmission mosquitoes. Not in all distribution areas of Anopheles, the pathogen of malaria (Plasmodium spp.) is found in the mosquito populations. However, the map shows the high potential of the disease all over the world. Apart from a few islands in the Atlantic and Pacific Ocean including New Zealand, Fiji and New Caledonia, the species of Anopheles can be found worldwide in the tropical, subtropical and temperate latitudes from China to Australia, from Canada to Argentina and from Finland to South Africa. (6)

In comparison, it can be seen that the disease “malaria” is mainly spread in the subtropics and tropics, see distribution map to the right side. This is, where the malaria pathogens occur and are transmitted by Anopheles mosquitoes.

At first glance, Anopheles species differ from other mosquito species mainly by their typical posture. The other mosquito species at rest such as Aedes keep their body almost parallel to the ground. Malaria mosquitoes, on the other hand, show a clear inclination of 30 to 45 degrees to the front (see images to the right side. Source: James Gathany, CDC).

The body shape is very slim compared to other mosquitoes. It converges like an arrow to the front and does not show the clearly widened abdomen as it is found for example with our house mosquitoes. Also Anopheles mosquitoes are usually much smaller. When magnified, one can see an evenly round dorsal shield (scutellum) and often scaly looking wings, which look like black and white shingles placed on top of each other. The most obvious feature, however, are the so-called palps. This is a kind of tactile feeler which can be found on the left and right side of the proboscis. In malaria mosquitoes they are almost as long as the proboscis itself.

The larvae also differ significantly from those of other mosquito species. Also here the attitude is decisive at first. While most mosquitoes seem to hang at an angle below the water surface, Anopheles larvae lie virtually flat on the underside of the water surface. This is due, among other things, to one of the most obvious physical distinguishing features. While other mosquito species carry a kind of snorkel (siphon) on their abdomen through which they breathe, Anopheles larvae have no comparable structure. (9; 10; 11)

Behaviour of the malaria mosquito

In principle, malaria mosquitoes are active at dusk or at night. However, in recent years it has been observed that some populations can change their day-night rhythm in response to control measures. For example, Anopheles species have now been observed that have begun to seek their blood meals during the day in response to the widespread use of mosquito nets. (12) As a result of such and other adaptations, species of the genus Anopheles are now found in almost every habitat. Like all mosquitoes, malaria mosquitoes actually live on plant sap. However, here too, the females need certain nutrients from the blood of vertebrates to produce their eggs. (9)

The life cycle of the malaria mosquito

One to two days after the blood meal, the female lays the eggs on the edge of any water body. A puddle, a knothole, but also carelessly thrown away rubbish in which a little water has collected is enough for this. Contrary to the species of the genus Aedes, Anopheles mosquitoes lay their eggs directly on the water surface because they can only handle dryness badly but contrary to the species of the genus Culex the eggs do not form coherent boats but are clearly smaller and single in the water. After another one or two days the larvae hatch and live through the typical four larval stages of all mosquitoes in the following 10 days. This is followed by about 2 days in the final pupal stage before the adult mosquito hatches. In case of a female, the young animal is ready for its first blood meal after about 3 days.

What diseases does the malaria mosquito transmit?

As the name suggests, malaria mosquitoes are mainly known as carriers of the malaria pathogens, the so-called plasmodia. However, plasmodia are by far not the only pathogens that can be transmitted by a bite of the Anopheles. For example, parasitic nematodes, called filariae, can also be carried by Anopheles from one host to another. Furthermore, there are a number of viruses like the O’nyong’nyong virus (ONNV), a relative of the Chikungunya virus or different variants of equine encephalomyelitis which can be spread by Anopheles. However, as a vector for viruses they play a rather minor role compared to Aedes or Culex. Nevertheless, up to 51 different viruses can potentially be spread by Anopheles. (13; 14; 15)

What can you do to protect yourself?

According to the WHO, about 2.7 billion US dollars are invested every year to further reduce malaria. Every year the list of malaria-free countries grows. In 2018, the WHO declared Paraguay and Uzbekistan malaria-free, and in 2019 Algeria and Argentina were added. The countries on the Mekong River (China, Laos, Myanmar, Thailand, Cambodia and Vietnam), once one of the most severely affected regions in the world, were able to reduce the number of infections by 76% between 2010 and 2018, and the number of deaths fell by 95%. Extensive multinational projects such as the “Malaria Atlas Project” are supporting local governments as well as scientists worldwide to further reduce the disease.

As a private person, whether at home or in your own garden, you can help to defeat malaria. The easiest way to do this is to protect yourself and thus not contribute to the spread of the disease. If you are travelling in an endemic area, you should always make sure that you are well protected against mosquito bites. It is best to have an insect spray with you that contains the proven active ingredients such as DEET, Picaridin or oil of lemon eucalyptus. These substances have shown effective protection against mosquitoes and other insects in numerous laboratory tests, also in our own Biogents laboratory. However, since it is not always possible to be one hundred percent sure that a mosquito won’t bite you, you should talk to your doctor about chemoprophylaxis in malaria areas. These are drugs that protect you from infection by the parasite in case of a bite. In your local accommodations, you should provide nets for doors, windows and beds. If you want to protect yourself at home against mosquitoes and the diseases they transmit, an effective, long-term as well as eco-friendly measure is using mosquito traps such as the BG-Mosquitaire CO2.